The mom pushing her stroller down Chestnut Street stopped to give me and the person I was with a hug. “Thanks,” she said. “I really needed that.” And then she continued on her way.

Moments later, as we walked past two women sitting at a sidewalk café table, one said to me, “My friend really needs a hug today.” I stopped to embrace her friend, “Hope your day gets better.”

A man was about to get into the driver's seat of his car with his family. He saw us and decided to come around for a hug. As we walked away, we could hear him saying to his wife in the passenger seat, “Oh! I feel so much better.”

We continued walking down the street. In my hands, I held a 2x3-foot cardboard sign with FREE HUGS written over it. 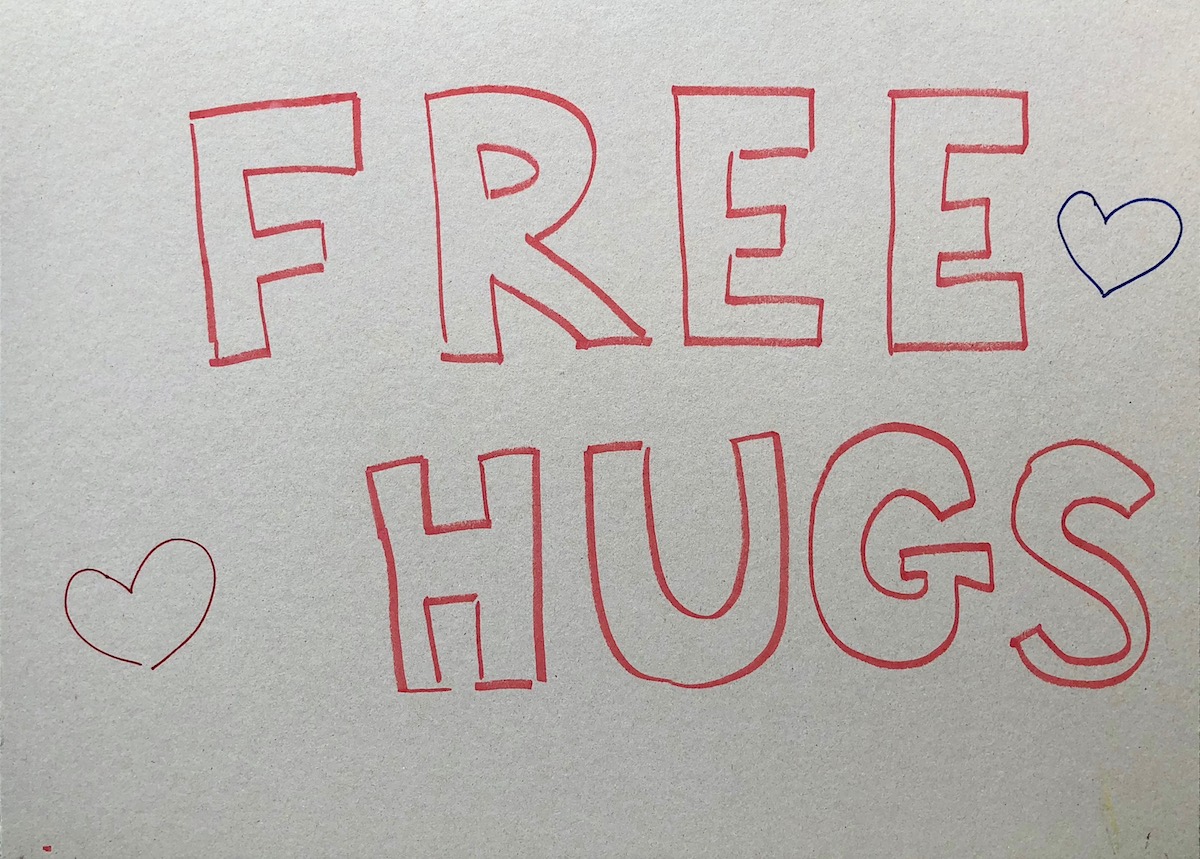 Earlier that morning, my coach Sandra had handed me a sheet of paper. Written across the top was “A Scavenger Hunt for Human Connection.” I'd been working with her for the past year to grow my own leadership in the world.

My mind paused a bit. How would I get someone to sing me a song? Let alone the fourteen other tasks on that list? Where would I even start?

I took a deep breath to ground myself. I reminded myself that I've spent the last two years intentionally stretching the edges of my discomfort at connecting with the people around me — whether it be telling a senior co-worker he intimidated me or telling a friend how much he or she meant to me. I paused to appreciate that I wouldn't be alone — my coach would be there to be a partner in my adventure.

I turned to Sandra and said, “Let's start with 'Make a FREE HUGS sign and give out hugs for 30 minutes'.”

And off we went to acquire some poster board at a nearby Paper Source.

Walking with a big FREE HUGS sign is an exercise in getting comfortable with being the spectacle on the street.

Holding a big 2x3-foot poster in my hands, with the San Francisco winds threatening to blow it away, there's really no place to hide. I couldn't make myself smaller. The only option to was to go all-in — wearing a bigger smile, making eye contact with everyone.

Some people on the street, intently focused on their destination, would walk by and not bother to even make eye contact or look at what we were doing.

Many people would chuckle or smile or point. And even when I jiggled the sign at them with a big smile, they'd shake their heads to say no, not for me.

One guy was walking out of a bank and said, “I got to get back to work.” I only realized later as he walked away that he was clutching what I imagined was a pouch of bills under his arms.

At the moments of rejection, it's easy to fall down a slippery slope that can lead to thoughts like “Am I being weird for holding a big sign? What are people thinking about me? Who am I to be doing this?”

Thankfully, all it takes to dodge that fall are a few beautiful moments.

One security guard turned down my request for a selfie (one scavenger hunt item was a selfie with a man in uniform) and my offer of a free hug, and instead gave me a handshake. “The world needs more people like you,” he told me as we walked away.

At one point, we had walked our way to the Palace of Fine Arts. With the blue pond and the palace as the backdrop, a group of teenagers dressed as princes and princesses stood on the grass, under tall lights for a photo shoot. The star of the show — a girl in a sky-blue, Cinderella-like gown — sat on the park bench, surrounded by family. She was celebrating her quinceañera. We waved our sign at her, but she declined a hug.

I decided to hold our dance party (I still needed to get two strangers to join me for one of the scavenger hunt items) on the grassy field next to the photo shoot. With Enrique Inglesias music blasting from a portable speaker, my coach and I started dancing on the grass and enjoying the beautiful day. Some people shimmied to the music as they walked by; others joined us for a few moves (success!). Little kids on a field trip pointed to our FREE HUGS sign that lay next to us and smiled and oohed at us.

As the photo shoot wrapped up, the girl in the Cinderella gown made her way over to our party and did a few twirls. She gave us a couple hugs with a big smile on her face. A shy, little girl hesitantly followed after her and gave me the sweetest hug.

We hugged forty-three strangers that afternoon and brought about many more smiles, and for one afternoon, we created some positivity in the world.

I learned many lessons that afternoon about what it means to be a leader.

As leaders, we hold back on doing many things because we lack the courage — and we miss out on creating more positivity and impact in the world.

We hold back on telling people the positive impact they have on us because it might feel awkward — it's easier to just rationalize to ourselves that they already know, as if they could magically read our minds. And we miss out on an opportunity to express gratitude and bring some joy into that person's day. We also risk that they stop doing the thing that we appreciate because they are unaware of their positive impact, and what a shame that would be.

We hold back on giving people the feedback they need to hear, either because we're afraid to give it or of how they will receive it — even when we want that person or the team to succeed. And we miss out on an opportunity to practice our authenticity and our compassion. We also risk that the relationship or the team never gets a chance to grow into what's truly possible.

We hold back on speaking up when we see something wrong — even when we know what is right. And we miss an opportunity to raise the group's awareness or to spark a change. We also risk that the bad behavior gets normalized as being okay.

When we're in our own heads, it's easy to fall into inaction due to fear. We're self-conscious. We feel awkward. We're afraid of looking bad. We second guess ourselves with, “What will other people think of me?”

One of my favorite quotes about courage comes from Mary Daly, who describes courage as a habit.

“You get it by courageous acts. It’s like you learn to swim by swimming. You learn courage by couraging.”

And couraging is easier when we get out of our own heads.

That afternoon also confirmed what I've been learning this year on other adventures: having a co-leader gets us out of our heads. As soon as my coach left and I was walking back to my car with my sign, I noticed myself suddenly become self-conscious despite having held the sign and danced in the streets for hours. It was a powerful reminder of how co-leadership unlocks a better way of working.

A year ago, the idea of walking through San Francisco with a FREE HUGS sign would have terrified me. Some of those scavenger hunt tasks — walking up to a group of strangers to get them to sing me a song (which we did!) or even something like buying them a cup of coffee in exchange for their life story — still give me pause.

But having seen the other side of fear and the joy that overcoming fear can bring people, I realize is that it's also no longer just a choice about me. Fear has its strongest hold when we're just thinking about ourselves. We can overcome fear when we shift to thinking about the good that our actions can do for the world — the good that the world needs. I think about the mom who told me she really needed that hug that day.

And if the outcome of bearing a bit of self-conscious fear and awkwardness is more happiness and positivity in the world, then maybe we could all use a little bit more awkward. 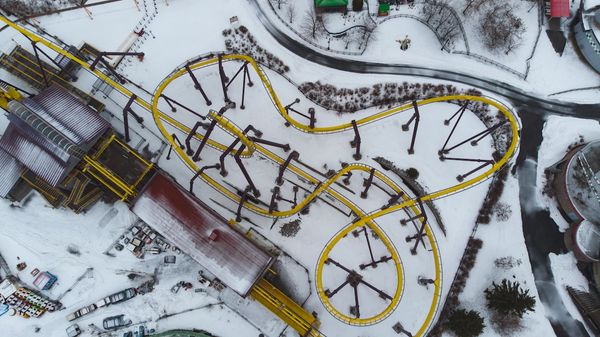 In 2012, Professor Neal Roese made a powerful discovery in the science of happiness and motivation. He surveyed hundreds of people across the United States and asked them to describe, 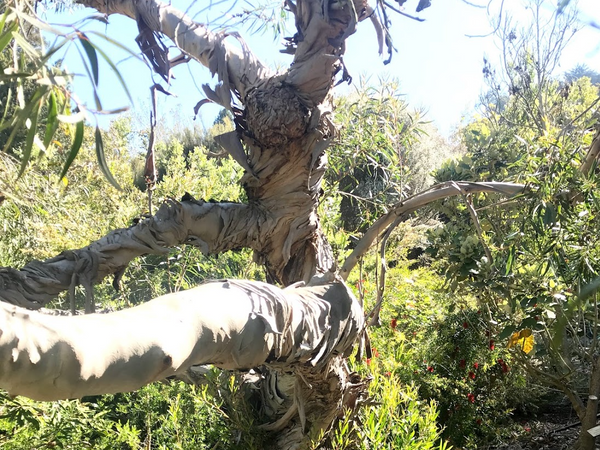 A few months ago, I started working with a coach [https://blog.coleadership.com/what-i-learned-about-investing-in-myself-after-a-year-of-coaching/] . I had seen her masterful coaching in one of the coach training courses I took,